Are you trying to find something in the Windows Software Center, which you know should be there but is not? Here are directions to update Software Center to show the most current list of available apps.

Are you an officer on a county computer and seeing a failed to validate certificate error message like the one below?

If you are still stuck at that point, please fill out a Technology Service Request and FRS Technology will help you as quickly as we can.

DTS has found a way to fix a new MCtime bug and it’s something you can do on your own. Here are the instructions:

Windows 10 allows you to customize and make the Start menu your own.

You can change the size of the tile: 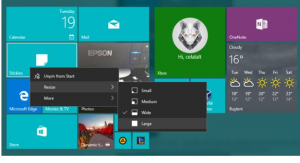 If you decide you don’t want a tile to show live info, but want to keep the shortcut, you can right-click it and choose “turn live tile off”.

To add a new tile:

Windows 10 allows for the user to personalize and customize their desktop. 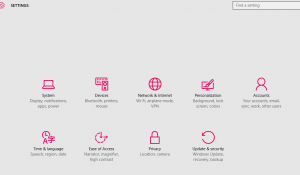 In the Personalization menu, the user can change backgrounds, colors, themes, etc.

Clicking the Task View button brings up the Task View interface, where you can see your open windows on virtual desktops you’ve added.

You can move programs among the different desktops you’ve set up. The program now displays on the other desktop.

With Windows 10, Microsoft has added new keyboard shortcuts to give you easier access to the new Action Center, Cortana, Task View, and virtual desktops.

Listed below are a few of the most common Windows 10 keyboard shortcuts:

If you are utilizing a laptop and the battery is starting to run low, Windows 10 will begin to cut back on background services and other threads so you can squeeze more out of your battery life. 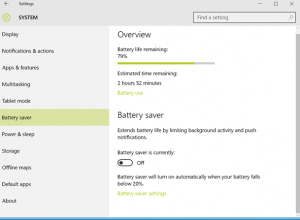 The screen also shows how much battery life and estimated time you have remaining.