Are you downgrading a call from ALS to BLS? While there has been a procedure in place for your documentation, the EMIHS group has added a new page (called Worksheet in Elite) for you to fill out, as well. Here are the basics:

Find and click the green Downgrade button, located on the right side of the screen where the Power Tools were a moment ago.

Note that a new screen has appeared. There is a menu on the left side with six headings. Clicking any of the headings takes you down the page to that particular section. 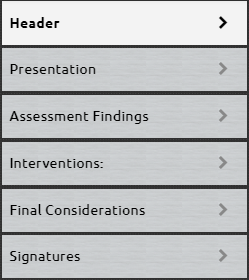 Are you at a loss with the Billing tab in Elite when you’re working on a patient report? Here is a TechTip that might help.

When you see this field, ask yourself: What is the level of service provided to the patient during transport? (Because of how we assemble resources, it is not always obvious if a patient was transported ALS or BLS.  We need to identify if the paramedic upgraded a call or if it was downgraded to BLS.)

Note: The choices in this field are driven at the national level but not all of the choices apply to how we do business.  We have adapted what you enter to get the information we need locally, which is why you can choose any ALS, any BLS and disregard the rest.

ImageTrend (ELITE) recently added the functionality to view a patient’s previous 12-lead EKGs and other vitals.  Here are the steps you need to take:

Questions about how to use this function may be directed to Captain Tim Burns or FF Benjamin Brighton.

Scenario: You arrive at the scene to find the patient obviously deceased and the family member present said that the patient had a heart attack in his sleep. In this scenario, you did not attempt to resuscitate the patient. Here are the fields you will need to change in Elite that differ from the typical patient report, but this TechTip does not address all of the other fields you should be filling in that are typical of any call in your talented report writing skill.

Scenario: Your patient is unconscious and has no ID in his wallet. Aside from being the worst mime act you have seen today, you have no information on him. How to record his name in Elite?

Contrary to what some will tell you, you should not call him John Doe (or anything punny but close) when you need to input a first and last name. Doing so implies that this is his actual name and you took that specific person to the hospital, as far as the people who are analyzing the reports are concerned.*

Instead, remember that you have options (Refused for people who refuse and Unable to Complete when you just don’t have the name and he is incapable of providing it).

Click the No/Not button next to the First Name.

Repeat for the Last Name field.

Then again, if you actually run the real John Doe to the hospital, you should record the name. You just may want to reiterate in the narrative that it’s his real name.

Scenario: Your patient has a bottle of medicine that you need to record but one that is not in Elite. There’s no Other option in the drop-down list. How should you record it?

Click in the Other Medical History input box and add the medicine(s) there.

Follow this up with e-mailing the name of the medicine(s) to Tim Burns (Tim.Burns@montgomerycountymd.gov) and he will have the medicines added to the Current Medications drop-down list. Please double-check your spelling.

Scenario: Your patient has declined (however forcefully) to share his/her phone number with you and it’s a required field in Elite. What to do?

If you leave the field blank: You will lose five (5) points toward your completion total.

If you type all 9s (999-999-9999, consistent with the SSN approach): You will not lose any points toward your completion total but you will still get a validation error, which explains that is it preferable to get a valid phone number.

Scenario: You are an ALS provider who needs to report a downgrade in Elite. The BLS provider has transported the patient in his/her ambulance and you intend to try to return to Station 8 without being dispatched. What do you need to report?

Ensure you are writing the report with the Unit/Call Sign as the ALS unit on the call.

Switch to the Call Info menu and Disposition tab to change the Primary Role of the Unit at the End of Incident  to Non-Transport-Other Reason and The Treatment & Transport Disposition field to Operational Support Provided – Patient Contact (if there was PT contact).

Leave the Patient Side Time blank. (Yes, it will be red, but it won’t trigger the additional validation rules this way.)

Remember, just as with the previous version of eMEDS, you still need to write a narrative to explain why you chose to downgrade the patient.

Are you trying to log onto Elite but getting an error of Initializing the Dashboard Resource Cache Manager? Are you frustrated and ready to inflict damage on the unsuspecting hardware?

Please don’t hurt the computer. This is a simple fix in Google Chrome and a quick one, at that.

Scenario: Your cardiac patient took aspirin prior to your arrival and you need to document this.

Change to the Provider Actions menu and Medication tab and click the Add button. 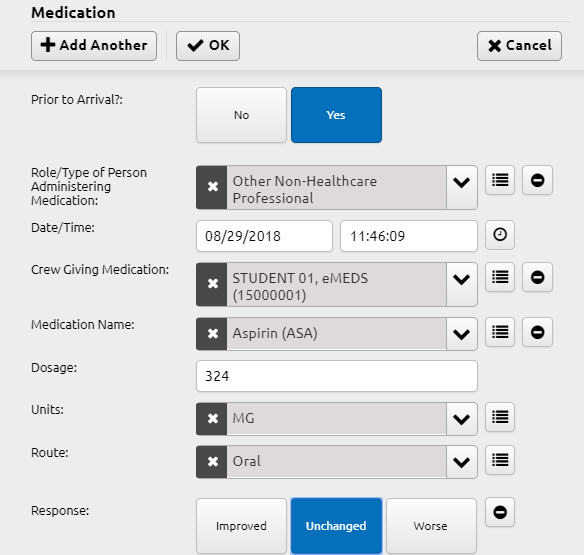